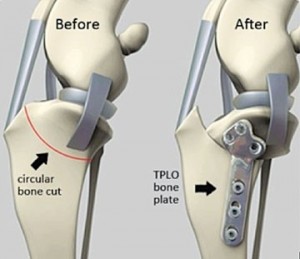 In dogs there is a joint called the stifle joint, or as we would view it, the knee of the dog. There is a ligament, called the cruciate ligament, that is positioned inside of the joint which maintains the joint and keeps it stable. Essentially, this ligament prevents the sliding forwards and backwards of the femur on the tibia bone. This ligament rupturing is one of the most common types of surgical corrections done on dogs by veterinarians and it is called the Tibial plateau levelling osteotomy (TPLO).

Contrary to most people’s thinking on this subject this incident is not due to a sudden injury that is traumatic, causing the rupture to occur. It is actually a very gradual process and it can occur in all breeds of dogs. There are some predisposed conditions that can lead to this condition such as degeneration of the ligament due to age, inflammation of a pre-existing nature, and abnormalities of an anatomical nature.

Early warning signs can include a mild lameness and stiffness and as the disease advances, the tear in the ligament grows, and the lameness becomes more noticeable. Once the ligament tears completely, the dog will not be able to support any weight on that leg. However, when time passes, the dog will begin to be able to use the limb in a limited sort of way. It is even very common for dogs to develop this condition in both knees, and it happens in one out of three dogs. Certain breeds of dogs are predisposed to this condition such as Labradors, Boxers, Rottweilers, and similar larger dogs.

All of these forces causes a high degree of excessive wear upon the cartilage of the joint, and pain is the result of all of the tissues around the joint being stretched in this process. Further injuries to the medial meniscus causes further disability and pain as this condition is allowed to continue.

After the repairs are made to the area, recovery is fairly rapid with the 50 per cent of the dogs being able to walk within 24 hours after the surgery. It has been found that most dogs will begin to walk within 5 days after the surgery. Within 2 weeks, dogs can begin to bear a moderate amount of weight, but caution is advised in order to keep the dog from going full tilt too soon. It is advised to walk the dog on a leash for two to four weeks after surgery to avoid a sudden run after a car or another dog, which might just be too much too soon.

If you have any further questions regarding Surgeries please don’t hesitate to contact us or Book An Appointment for a consultation with one of our Veterinarians.