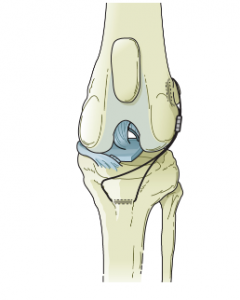 Cranial cruciate ligament injury is one of the most common injuries in dogs. This ligament is located inside the dog’s knee and crossed with the caudal cruciate ligament. Its function is to stabilize locomotion, which is the reason why dogs suffering from this disease often cannot walk. Besides not being able to walk, they also experience a lot of pain.

In order to relieve pain and avoid further complications, surgery is strongly recommended, and one of the options is extracapsular suture, also known as external capsular repair. As the name of the procedure suggests, this technique stabilizes the joint outside the joint capsule.

How is it done?

The damaged portions of the ligament and the torn or damaged meniscus are removed.  In order to hold the bones in place, a heavy suture material is used. This material stabilizes the bones and prevents the knee from improper movement. Another role of the suture is to allow scar tissue to slowly build itself up around the joint, and to create its own support system. The important thing to know is that the suture isn’t a permanent solution or a substitute for a torn ligament – it is there to help the knee recover faster.

Usually, the recovery process lasts around 10 weeks, but this mostly depends on the dog. Some of them won’t use the leg for the first week or so after the surgery. It is essential to take good care of the pet after the surgery, as it takes time for scar tissue to form naturally.

Extracapsular surgery is one of the oldest veterinary procedures, so it is also referred as a traditional surgery, but over the last few decades there were certain improvements and innovations that have improved the success rate of this procedure even further. Unlike in the past, suture connections are now more reliable and less irritating. After all, we are here to take the best possible care of man’s best friend.

If you have any further questions regarding Surgeries please don’t hesitate to contact us or Book An Appointment for a consultation with one of our Veterinarians.